Three foresters from Germany visited ALRF earlier this month as one of many stops on a three week tour of the Pacific Northwest. This group  is part of a government training program in Germany  where new recruits are required to travel and observe forest management practices in other countries.  In addition to  visiting the Ancient Forest and ALRF, Jon, Steffen, and Hendrik’s trip also includes the Yukon, Oregon, Washington, Vancouver Island and the Malcolm Knapp Research Forest. 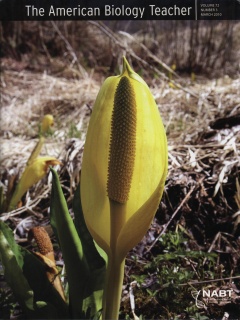 UNBC researcher and senior lab instructor, Roy Rea, has published yet another great photo on the cover of The American Biology Teacher journal.  This  photo shows a skunk   cabbage   (Lysichiton    americanus) blooming in  early spring at ALRF. Click on the image to read the published photo caption,  and find out why this plant has such a ‘skunky’ smell! 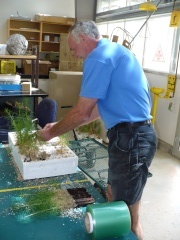 The larch seedlings, sown in December, are now happily in the ground at Aleza Lake Research Forest where they can be observed and measured for many years to come.

The process started with watering the seedlings  throughly and carfeully pulling them out of the styroblocks (“hot” lifted, meaning  they were not forced into dormancy through refrigeration), bundling and wrapping them  in clear plastic. After culling out some of the dead and weaker trees, a little more than 2400  seedlings were prepared for planting.

Because this is an experimental trial, the trees were planted at high density (2000 stems per hectare) mostly to mitigate any loss from mortality, but also to produce tall straight stems. The seed came from the West Kootenays of British Columbia, so it is expected that the trees  will be reasonably tolerant of the ALRF climate and snowpack.

END_OF_DOCUMENT_TOKEN_TO_BE_REPLACED

Come visit us at the Aleza Field Education Centre.